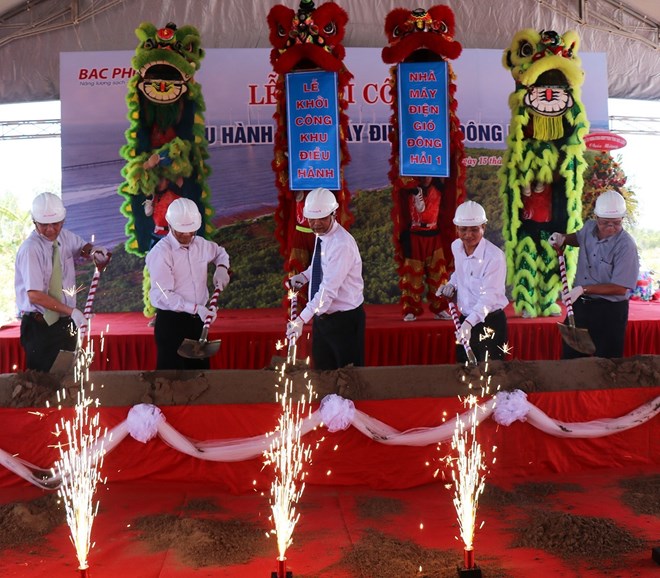 At the ground-breaking ceremony (Photo: VNA)

According to the Director of Bac Phuong Joint Stock Company- the investor of the project- Mai Trong Thinh, the construction of the operations centre, which costs 130 billion VND (5.6 million USD), will lay the foundation for the building of undersea infrastructure of the wind power plant, slated to begin in Quarter 4.

The first phase of the Dong Hai 1 wind power plant is estimated to cost nearly 2.5 trillion VND (107.8 million USD), and has a total designed capacity of 50 MW. It will cover an area of more than 935 hectares of water surface and more than 11 hectares on land.

Thinh said that the plant will have 12 wind turbines, a transformation station 22/110kV-1x63MVA, a 110kV line, an operations centre and other supporting works.

Upon completion, the plant will contribute 161.02 million kWh of electricity to the national grid each year.

Speaking at the groundbreaking ceremony, Vice Chairman of the provincial People’s Committee Vuong Phuong Nam said that the project helps branch out clean energy, which is classified as one of the five economic pillars in the province.

He committed to creating favourable conditions for the investor so that the project will be put into operation soon, contributing to developing local socio-economy.